The Legendary Hero of Hawaii

DUKE KAHANAMOKU was not only the father of international surfing. He was also an Olympian. When Duke was 21, he won his first Olympic gold medal. Between 1212 and 1924, Duke won two silver medals and three gold medals. No one could match his freestyle swimming. He swam with the grace of a natural waterman. He had honed and sharpened his skills in the wild waters of Oahu, Hawaii.

Of all his exploits, of all his legends of a true Hawaiian waterman, one event strikes my mind. Not only was he a great surfer, who helped spread surfing outside of Hawaii, but he was one of the first “big wave surfers”

Recently, I read a book by Susan Casey, The Waves. One of the themes in her book is the lives of the world’s big wave surfers. She equates their ways of living with the Polynesian ways of the “waterman.” Casey describes the waterman as a person who is totally confident in the ocean, could swim for many hours in rough waters without fatigue, would risk his life to save the lives of others from the perils of the ocean, would paddle for hundreds of miles if he must, and could commune with the creatures of the deep, including the sharks.

Duke Kahanamoku’s legendary surf ride in the waters off Waikiki beach is still a ride not many surfers can match to this day. Equipped only with his old-style longboard of his time, Duke had caught and rode a giant wave called “Bluebirds.”

Gliding on the massive face of the tons of rushing waters, under the curling power that could snap a man’s bones, Duke Kahanamoku tamed the beast. The waterman became one with the wave. He balanced on his longboard, his every muscles in tune with the force of the wave, the power the Hawaiians call “Mana.” Duke rode the giant wave for a mile and three-quarters. The spectators on the beach watched awestruck.

When Duke landed on the beach, he lifted his longboard, walked through the cheering crowd, without words, deep in his thoughts. He sat down to take in all that had happened. It is told—now a legend—that to the day he died, Duke Kahanamoku kept that one ride shining in his memories.

When I was kid, I saw a black-and-white movie (later colorized) about a Polynesian boy named Tico. Tico lives in a remote seaside village in the South Pacific, where he befriends a helpless, baby shark. He names his shark Manitu.

Tico raises the shark secretly in a lagoon, feeding it with the help of his girlfriend, Diana. When the shark grew too big, Tico reluctantly frees it back to the ocean. Years passes. Time brings changes. A rush of civilization changes his village. People eagerly adopt the new ways of living. But Tico, now a young man, remains true to his love of the ocean.

Tico lives alone by the lagoon. He becomes a pearl diver. One day Tico nearly dies in the waters. Miraculously, his shark Manitu, now grown to its full adult magnificence, saves him.

The film ends with Tico, his girlfriend, Diana, and his shark, Manitu, abandoning the home island in search for a more peaceful existence.

That film, Tico and the Shark, embedded a strong impression in my childhood heart. Since then I romanticized the pure ways of living with the ocean. Now evermore so because, as I write this blog, I live on the island of Oahu, which is sadly overrun by the rush of modernization.

Ah, Tico and the Shark.

There are countless men in the world, who like Tico, stand proudly in the spirit of the Polynesian waterman. And amongst all of them, one stands out in my mind as their king—Duke Kahanamoku.

If you visit Waikiki, walk to the bronze statue of Duke Kahanamoku in Kuhio beach. Much has changed since Duke’s time. But if you ignore all the hustles and bustles of the modern Waikiki, close your eyes, feel the breeze in your face, you can perhaps still hear the distant echoes of Duke surfing that roaring Bluebirds.

Hi James – there is so much heart and inspiration in this. I loved the three stories woven together – Tico and the shark, the waterman, and Duke. I felt the power of that wave and imagined it as too holy for him to speak about – words probably would not do it justice. Thank you for sharing this. – Bonnie

Hi Bonnie – Thank you very much for your kind words. I’m flying to Molokai tomorrow with my wife, Sharon, to visit the former leper colony and the grave site of Father Damien (now a Saint). Hawaii has so much to offer, so much more beyond beaches and water sports and tropical cocktails. Ciao, James 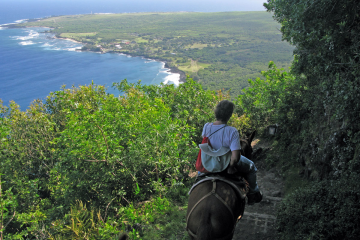 Kalaupapa – A Mule Ride down to the Land of Sorrow

Down the 26-Switchback Trail KALAUPAPA is today’s destination on our week-long trip to Molokai, Hawaii. Early in the morning, high up in the misty reaches of the northern mountains of Molokai, we arrive at Uncle Read more…