The Death of Socrates – The Story in a Painting

THE DEATH OF SOCRATES – Visiting the Metropolitan Museum of Art (The Met) is one of my favorite pastimes when I’m in New York City. I like to wander through its vast galleries, my course of discovery driven by my whims. However, I have a few spots I make a point to visit. One is The Death of Socrates, painted in 1787 by a thirty-eight-year-old painter named Jacques-Louise David. Why do I go there? Because it makes me think: Do I have the courage to die for my beliefs.

The Death of Socrates

The Story of Trial and Execution of Socrates

The scene of Jacques-Louise David’s painting was adopted from Plato’s book, Phaedo.

In the spring of 399 BCE, the Athenian government charged the 70-year-old Greek philosopher, Socrates, with the crimes of denying the authority of Greek gods and of corrupting the Athenian youth with his beliefs. Particularly, Socrates believed in the immortality of souls. The accusations brought against him were, as we might say today, all “fake news.” At the trial by the Athenian courts, which was composed of its citizens as jurors, Socrates was offered a choice. Two paths had been set before him. First, he would renounce his beliefs and live in exile. Second, he would stick to his beliefs and be sentenced to death.

What Would I Do?

Now, here’s where it makes me think. Do I have the courage to choose death?

I’m not thinking of the ideological response anyone can give to a hypothetical situation. It’s easy to be courageous when the stakes are imaginary. My thoughts are focused on the hard question set in reality: Which course of action would I chose—to live or to die?

Socrates chose to stand up for his beliefs. It didn’t take him a second to reach that decision. For Socrates, to deny the truth of which he believed would be to renounce his true self—all that made him Socrates. So, he chose death.

Jacques-Louise David’s painting shows Socrates at the final moment of his life— execution by his own hands by consuming poison.

Here is Socrates, a strong bodied, unafraid man, sticking to his beliefs just seconds before his death. His composure is calm. His one hand is raised, a finger pointing upward, as if to the heaven. He is making his final point of his beliefs. His attitude reflects his primary belief of the immorality of souls. Socrates is illuminated by the light cascading from above. His other hand is extended, so casually, to receive the mechanism of his death—the cup of hemlock.

The Executioner of Socrates

The executioner, handing the cup of death to Socrates, is crying. Why? Perhaps, he is a student of the wise, old man, and he is remorseful of his duty, having to hand the righteous man the poison of death. I feel his torment in his composure.

Look carefully beside Socrates’ right leg on the bed. You’ll see a harp resting on strong, steal chain. The chain, I’ve read, represents the power that binds the physical body to the material world. The harp, I’ve read, represents the power that conquers the physical body. This melodious instrument is a metaphor that will transcend Socrates’ soul into the eternal harmony of the true world beyond.

Beneath the executioner’s feet is an unlocked ankle chain, symbolic of Socrates’ release from the worldly, material bounds. Socrates is no longer of this material world. He is already contemplating of the world beyond physical death.

Socrates – The Husband of Xanthippe

In the background, Socrates’s wife, Xanthippe, is leaving, unable to bare the sight of her husband’s final moment of death. She is led up the stairs, perhaps, by her family or by her close friends. She’s turned one last time. She waves her hand in farewell. But her gaze is not upon her husband but upon us, the viewers. It is at us she gazes. What is she trying to communicate to us with her gaze? For me, her message is clear: It is our burden as humanity to live with the knowledge of having killed a righteous man.

Socrates – His Friends and Students

Here’s the magic of numbers in this panting. If you count all the people surrounding Socrates, you’ll count twelve. Like Jesus at his Last Supper. Christ was surrounded by twelve disciples. Socrates is accompanied by twelve people before his death.

Those twelve people—his family, friends, and students—are all distraught, full of grief. They surround the wise, old man, and they are inflicted with deep sorrow, unable to bare the injustice, unable to accept their lives without Socrates.

Socrates – His Student, Plato, as an Old Philosopher

At the foot of the bed sits the philosopher, Plato. At the time of Socrates’s death, Plato was only 29 years old. However, here, Plato is depicted as an old man. His expression is grave. His eyes are closed. His head is bowed. He is without emotions. His ears are turned away from Socrates’ last words.

Beside Plato’s chair is a pen and a scroll. The ink well is open. The scroll is slightly opened to a blank parchment. Socrates did not leave any written words. This blank parchment is where Plato will immortalize the teachings of his master, Socrates.

The question I ask myself in front of Jacques-Louise David’s painting is—Which path, if I’m facing a similar circumstance as Socrates had faced, would I choose? Would I stand up for what is right? Or would I bend to my fears, cast away my beliefs, and chose to live? Of course, in a make-believe casualness, I could say, Of course I’ll stand up for what is right. But, more likely—I feel this in my heart—I would choose the latter. That thought scares me. So, I tell myself, you don’t know your answer until you face that crossroad in your life. And that’s true. It’s like the dichotomy of choice between the “Red” and “Blue” pills in the film Matrix. Which pill would I take?

I know this painting is an idealized capturing of the death of Socrates. No one knows how the real scene had unfolded. But in spite of that fictionalization, the fact remains that it did really happen: Socrates chose his just freedom to stick to what he truly believed, and for that, he chose to die.

Dr. Martin Luther King said, “If you have not discovered something you are willing to die for, you’re not fit to live.” And Dr. King lived his creed. He lived courageously, true to his words, and Dr. King, too, died in his pursuit of what he truly believed.

I would perhaps die a thousand times in my mind, but for these brave, wise men, they died only once and only under their terms.

I always walk away from the painting, The Death of Socrates, with something heavy weighing my soul. At times, I feel like a charlatan. A fake. A guy just living a mediocre life. Only talking the talk. But not walking the talk. How I wish I had that “something” for which I’m willing to die.

Maybe, one day, I’ll find that “something.” So, until that day, to keep my question fresh in my mind, I’ll keep coming back to stand in front of The Death of Socrates. 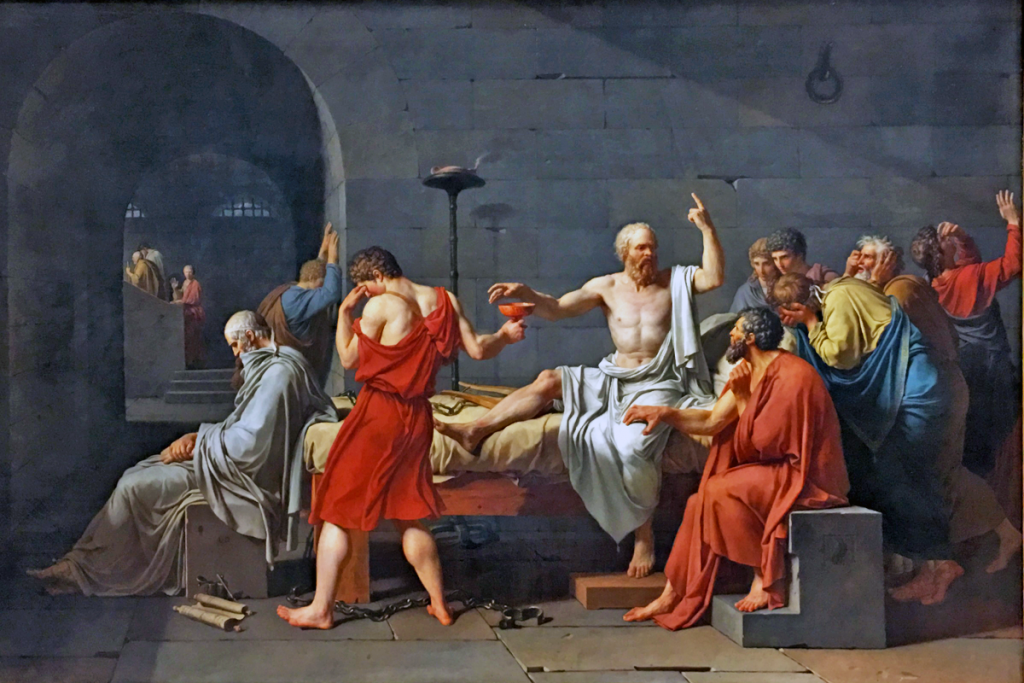