Why Is It So Dangerous?

If you visit Naples, Italy, you can’t miss Vesuvius. The volcano juts out in the middle of the urban sprawl. It looks as if the city had first staked its claim on the land, and then later the mountain decided to pop up and mess things up. On the volcano’s slanting slopes, houses and buildings cling, encroaching almost a third way up toward the summit. At night, the lights from these dwellings shine on its darkened circumference, glittering like necklaces adorning a dark sleeping volcano.

Vesuvius – The Danger that Belies Its Beauty

From the distance, Vesuvius projects a lovely sight. It stands at only 4,275 feet. It’s one of the world’s smallest active volcanoes. The mountain may seem small and cuddly, but don’t be deceived. The graceful double-camelback profile, cradled by the cityscape, belies its violent temperaments. Fooling with Vesuvius is like messing with a sleeping Tasmanian Devil.

“Vesuvius is currently the most threatening volcano in the world,” warned Professor Franco Barberi of the Rome University <> during the 2004 International Geological Congress held in Florence. The reason is simple: Nowhere else on this earth do over a million people live right next to, and literary on top of, a volcano that could at any time blow its lid.

Vesuvius – Hiking up the World’s Most
Dangerous Volcano

Curious to get up close to the sleeping menace, I dragged my wife, Sharon, and hopped into our Fiat. Passing the portside town of Ercolano, where the excavated ruins of Herculaneum bear testimony of the 79 C.E. eruption, we took the winding Strada Vesuvius, working our way up the volcano.

At the elevation of 1,970 feet, we came to the last building along the road—the Vesuvius Observatory. Vesuvius is the world’s most studied and monitored volcano. Built in 1845 to monitor the slumbering giant, the observatory now hosts only a museum and library. The observatory’s surveillance center having long ago moved to Naples, raising some speculations of an imminent eruption.

From this point onward the volcano is protected. The Vesuvius National Park was founded in 1995 by the Italian government to put a stop to the city spreading higher up its slope with illegal constructions. The park has nine nature trails. The most popular is the “Gran Cono,” or the Great Cone. Why? Because this trail takes you right up to the top, where you can circumvent the caldera.

So we headed for the trailhead of Gran Cono. Parking our Fiat at a public parking area called “Quota 1000,” we were ready to tame the monster. But Vesuvius at this close range looked tamer than from the distance. A well-groomed Gran Cono switchback traced up the gray-black mountainside. At the entrance, an elderly park attendant was handing out wooden hiking sticks.

A Brief History of the Volcano

Vesuvius – An Easy Hike up to the Summit

The moderate ascent to the top took us only 20 minutes. Along the way, we saw many children and elderly persons, even a woman scaling up the trail in her dress shoes.

At the summit near the crater’s edge, rusted cables of funiculars—a cable railway system—lay abandoned, destroyed by the last eruption. Nearby, a kiosk displayed a black-and-white photograph of that eruption. Snapped by the Allied Forces the aerial shot showed the crater billowing thick dark clouds.

When Vesuvius last erupted in March 1944, Naples was struggling from the devastation of World War II. The city was heavily bombed by the advancing Allied Forces, and then the retreating Germans destroyed what was left of the city’s infrastructure. When the American and British Forces finally marched into Naples, the Neapolitans were barely clinging to their livelihoods. Then Vesuvius erupted.

We peeked into the crater of that last eruption. Plugged by rocks and boulders, the caldera displayed nothing that revealed the danger lurking beneath its bottom. On that day, we saw not a wisp of smoke.

In geological terms, the 1944 spectacle was a mild eruption. It was marked by the fuming black clouds and Hawaiian-style emission of liquid lava.

Strolling along the crater trail, I tried to make sense of what some scientists fear.  Many predict the next eruption—long overdue, some say—would be the extremely violent version. It will be like the explosion that destroyed Herculaneum and Pompeii.

If you can imagine such an event on a smaller scale, it’s like uncorking a wildly shaken champagne bottle. In a realistic scale, such an eruption has the destructive power of a nuclear bomb.

But there atop Vesuvius, I couldn’t envision such a devastating scenario. Hazy blue sky canopied the mountain. A cool breeze swept up from the Tyrrhenian Sea. Below us, vineyards and orchards dotted the slope. Houses and buildings sprawled out like toys to the edge of the Gulf of Naples. On the shimmering waters of the sea, in the distance, floated the island of Capri.

We approached the southeastern bend in the trail. Then we saw below us, splotched on the green earth, a patch of brown land—the ruins of Pompeii.

This is what I came to see. Having visited Pompeii a few times, I wanted to see the ruined ancient Roman city from the volcano’s point of view. So, we sat on the rocks and took in the scenery below us.

Around us at the rest point of the summit, people lounged, sitting on rocks, sipping from water bottles, eating their snacks or lunch. For them, like it was for us, the experience was simply a pleasant hike up Vesuvius.

At least the Pompeian nearly 2,000 years ago had no idea of the danger this mountain concealed. They lived, unknowingly, until the mountain blew. But us? We know of its danger. We know we’re treading on an active volcano.  We know its eruption is long overdue.

I touched the rock I sat on and imagined what it would be like if Vesuvius decided to wake up at this moment. Nowhere to run for safety. All be over in a flash.

I looked around. And here we were, enjoying life, enjoying the day under the sun. Perhaps, we’re so vain, blindly entrusting our scientific-and-technological-know-hows, believing that we’d have ample warning before Vesuvius blows.

I climbed Vesuvius. Yes, is very easy. Is a stratovolcano but it’s shapes are gentle, though the Gran Cono is steep (They build roads on Gran Cono to make the travel easier).

Vesuvius is small, but it is a VEI 6 volcano. VEI 6 in Italy isn’t that impressive. The average italian volcano is VEI 7 (like the stratovolcano named Alban Hills and all the calderas and maars in Lazio region). The extinct Roccamonfina was a major VEI 6 volcano. The extinct Valsesia supervolcano was VEI 8. The good, old Etna, in it’s history had one VEI 6 eruption. Only Amiata, Vulture (maybe), Vulcano and Stromboli (especially Stromboli) never reached that power.

“We peeked into the crater of that last eruption. Plugged by rocks and boulders, the caldera displayed nothing that revealed the danger lurking beneath its bottom. Not a wisp of smoke”
– Didn’t you see fumarolas inside the crater? Vesuvis has several of them. 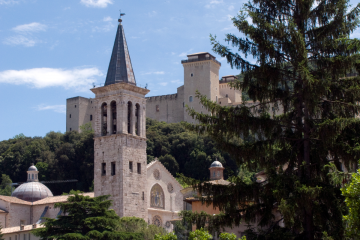 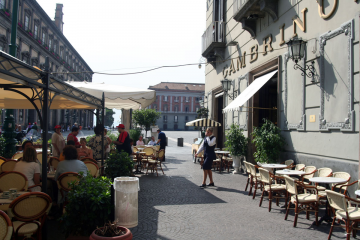 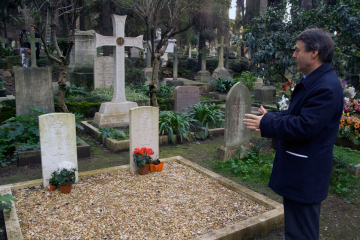 Lawrence of Arabia – What If He Was Never to Be?

An Intriguing Possibility in Rome LAWRENCE OF ARABIA. He’s world famous. His real name is Thomas Edward Lawrence. He was a British military officer who had embedded himself in the Great Arab Revolt in 1916. Read more…